THE COAST IS NOT CLEAR

A story for all ages..

Take a look at the Christian Faith Publishing website for a glimpse of this story of two tremendous souls, Merle and Susan, by clicking on the link below:

Chapter One –
The Lake Country

At five-thirty in the morning the sky was soft and gray in pre-dawn stillness. Becoming light ever-so-slightly, not cool but awaiting the warmth of the morning sun, the day was still an hour from emerging. Fumbling around in the woods behind the house with a shovel, flashlight, and coffee can, Merle turned over clumps of earth and searched for worms that would please the fish in about a half an hour. Mixing the perfect composition of moist soil, rotting leaves, a few sticks and a few dozen earthworms and night-crawlers, the search for bait was successful, as it always was. Time to wash up and get the pole, tackle box, stringer, and bucket ready.

Walking past the dog house on the way to the house, Skipper poked his head out and noticed Merle with his hands full going over to the shed. He told Skipper to stay but the curious Beagle-mix moseyed out and walked as far as his chain allowed him to venture—which was about 20 feet—where he stopped, sat, and watched as the young fisherman gathered his implements together. Back, then, he lumbered into his doghouse to continue watching Merle from a sleepy flop. Now, all that was left to do before he left was fill a jar of ice water, use the bathroom, wash his hands, and give mom a kiss goodbye.

Merle told her, whispering, “Mom, I’m going fishin’. Be back before noon.”

She returned his kiss and said, “Be careful, honey. Catch us some nice ones.”

Merle’s dad rustled around a little on the other side of the bed but didn’t wake, which was Merle’s preference. After all, he just wanted to get out the door and head down to the lake before someone else grabbed his fishing spot on the pier. It was June, a Saturday, so all he needed to wear was what he had on from digging bait--- his t-shirt and short sleeved brown shirt, shorts, socks, and tennis shoes. Bam, out the door he went, carefully and quietly shutting the screen door without allowing it to crash loudly to a close.

In his bucket went the bait, jar of ice water, towel, and a baggie with six or seven fig newton cookies wrapped in a gym sock to keep clean. Tackle box and fishing pole in one hand, bucket handle in the other hand and off he went, up the path behind the neighbors’ houses to the lake road, up the hill and down the steep hill Merle strode. There was always the slightly anxious moment as he reached the peak of the road when, heading then downhill, he could see if anyone was on his pier.

“Thank God,” he whispered, when he noticed the pier was empty and the lake as smooth as glass.

Although there was a slight breeze that morning, the lake was under it, speaking vertically, so not even the slightest bristle of waves were present that beautiful day in June, 1965. The glad anticipation of a fine fishing experience filled Merle’s emotions like custard in a cream puff. He could barely contain himself he was so ready to start fishing.

The last stars of the previous night twinkled above him as the eastern sky began to glow. The sky behind him, back west toward the house, was still dark and Skipper was probably snoring out in his doghouse while his brothers, sister, and parents were still sound asleep in their beds. With just enough light to put a huge night-crawler on his hook, Merle set the bobber at about five feet and maybe a little more, and cast the rig out 25 or 30 feet onto the still, flat lake.

“Splash!” was followed by several concentric circles of wavelets radiating from the entry point and the bobber popped and bounced straight up and down, signaling the exact location of the bait not far below the surface.

Merle realized that he needed a drink after lugging his fishing gear down the path, up the road, and down the hill to his prime spot, so he reached into the bucket for his jar. Glancing out to his bobber, he saw it wiggle, then bob, and then slowly begin to drift sideways as it gradually submerged.

“Hm, looks like a bass” he whispered and set the jar down while picking up his pole.

The bobber, barely visible now, signaled it was definitely time to yank and crank. Bam! He pulled his pole straight up and backward as the tug of the line transmitted the set hook into his hands. Then he felt the pull of the unidentified, hooked creature, who’d taken off toward deeper water.

"Could be a catfish,” he thought and reset the drag on the reel to prevent breaking the line off at the hook’s knot.

Then the fight was on. The drag worked, zinging and magically stretching, but not breaking, the four-pound test line Merle always replaced every spring. “Z-z-z-z-z-z-z-z-z-i-i-i-i-i-i-i-n-g-g-g-g,” howled the reel’s drag while Merle kept the line taught and began retrieving the prize. Sweat was beading on his forehead and temples, now, as the worry of losing this first-fish-of-the-day from a mistake or lapse of concentration overcame his imagination. Now, the caught victim was becoming less aggressive---even seeming to give up.

“You’re mine, now,” he thought and hurriedly wound the crank of his reel to pull his prize to the pier.

Lacking a net, Merle carefully guided the fish closer and closer to him. Finally he saw it in the early morning light.

“A bluegill!” he quietly exclaimed. “A huge bluegill!”

He snatched his towel from the rim of his bucket and laid it across his left hand that swiftly scooped up his hefty reward with the hook completely swallowed.

“Aw, jeez, I’ll never get that out,” Merle thought. The fish was throbbing, gasping, and needed to get back into the water. “I know, I’ll just cut the line and maybe he’ll live a little longer.

He pulled his knife out of his pocket and cut the fishing line an inch from the fish’s mouth and then, reaching into his bucket, grabbed the stringer. Feeding the lead-spear end of the stringer through the fish’s gill and out its mouth, Merle ran the spear through the ring at the other end of the thin, green and white striped fish rope. He dropped the---probably two-pound---fish gently into the lake ten or so inches below the surface of the pier and tied the ring-end to a board.

Merle saw his large conquest darting to and fro near the lake-bottom appearing to have revived from its traumatic seconds out of water. It was so wide Merle could barely grip its girth from the underside to the top fins. Merle thought that it was, over and beyond, the largest bluegill that he had ever caught, let alone seen. He wondered how old it was.

“Easily three years old,” he mumbled as he got a new hook out of his tackle box and sat down on the pier to re-rig his line.

The Coast is Not Clear?

A - Just about anybody, any age, male/female, any religion, any ethnicity.

Q - What is the main reason to read it?

A - Readers enjoy how people deal with difficult, challenging situations.

Q - What is a "sci-fi romance?"
A- It is a story of a special relationship that takes place within a science-fiction plot. The reality is that there are co-main characters.

Here is an excerpt to get you started:

The Coast is Not Clear

is my break-out novel.  It is the story of Merle and Susan who are quite romantically involved as this picture clearly shows.  Join them as they weave in and out of life with quite a twist that neither of them ever expected.  I am certain that readers will grow to like them and want to walk beside them as they walk with God into world history. 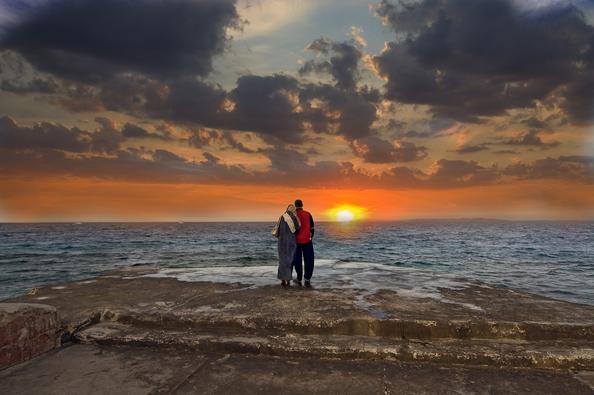 IN PAPERBACK AND eBOOK FORMAT